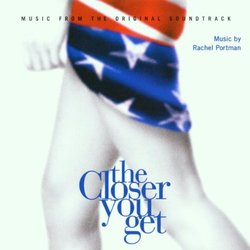 The Closer You Get

Review: Closer You Get, The

by David A. Koran June 23, 2001
3 / 5 Stars
I've been a fan of Rachel Portman's work for the past six or so years, mainly due to her quirky melodies and use of strong themes throughout her scores. As with last year's Oscar nominated The Cider House Rules, Portman provides the listener with another tightly integrated and repeated theme throughout the score for The Closer You Get. It's similar in several ways to an earlier work of Rachel's own Benny and Joon, through the quirky, off-center main melody, but also through a re-hash of the Proclamers' "I'm Gonna Be (500 Miles)". The song, this time, relies upon its ethnic (Irish) origin to add flavor to the film's soundtrack as with "At The Dance," a non-vocal track, but is relevant, and nice, source music.

The film is a relationship tale, if the listener couldn't tell by the selection of vocal tracks on the CD. The music on the CD has vocal tracks from the great Satchmo (Louis Armstrong) to the reliable Jackie Wilson, whose song lyrics lends to the film's title. The vocal selections add to the desire to reign in the film's musical accompaniment as "no-brainer" effort. However, combined with the rather paltry representation of Portman's score, the CD lends itself to a rather passable effort. The recall of a melody similar to Benny And Joon is easily made through the instrumentation used to introduce the listener to the main theme. With bassoon, toy accordion, guitar, and pennywhistle providing the 16 note melody we're drawn in almost immediately to the odd and bizarre. The overall theme does, however, have specific melodic ties to, at least in the refrain (and more noticeable in other recurrences of the theme), a Celtic musical heritage. It's enjoyable at the very least, but is nothing special that would move the music world.