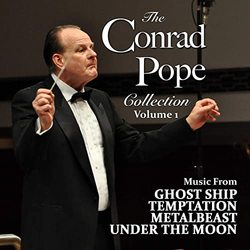 The four film scores included on this collection all stem from 1992-95 and are the first movie scores Conrad Pope wrote. The music reflects the influence of the composers Pope orchestrated for, but they also exhibit what he could do with that inspiration when left to his own creativity. All four of the scores on this album were performed by a contracted orchestra in Salt Lake City, Utah.

Dragon's Domain Records is excited to bring the contents of The Conrad Pope Collection, Volume 1 to compact disc for the first time. The music has been mastered by James Nelson at Digital Outland, with liner notes written by author Randall Larson, including the participation of composer Conrad Pope.