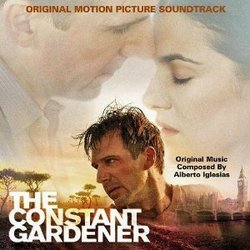 The Constant Gardener took a different approach to the wars and suffering in Africa by looking at the political and economical struggles in the country. Filmed with a gritty documentary-like cinematography, the camera followed Justin (Ralph Fiennes) as he looked for the truth behind his wife\'s (Rachel Weisz) murder. Behind the stunning visuals of the African landscape is Alberto Iglesias\' score, which is quiet, but effective.

Iglesias\' approach is generally minimalistic, with light percussion, woodwinds, and plucked strings with the occasional heavier cue for more dramatic moments. This instrumentation gives a sense of motion to the music and, while in a very different genre, is similar to John Powell\'s approach for I Am Sam. There is a surprising lack of a vocal presence in the score. Two cues, "Dicholo" and "Khothbiro", performed by Ayub Ogada feature a solo vocalist; the sorrowful performance of the latter cue makes it one of the more memorable cues on the album. However, as a film about the suffering of the people of Africa, I expected more vocals, like the first half of Hans Zimmer\'s Tears of the Sun, which I think worked better for portraying the pain and suffering in Africa.

The album opens with "Tessa\'s Death" which is comprised of sorrowful solos on strings and low woodwinds. Both in the film and in the music, it is an interesting way to open, as the audience is immediately saddened, but it gives both a chance to build and grow as we follow Justin\'s memories and journeys through Africa. Some of the more intriguing cues from the score are from the more dramatic moments, and these are usually driven by the marimba and other percussion ("Motorbike" and "To Airport"). "To Loki" combines this with a cello solo that accompanies the stunning shots of Africa\'s wilderness the same way Tan Dun scored scenes of China in Crouching Tiger, Hidden Dragon. One of the most powerful cues on the album is "Funeral". The cue opens with a series of piano chords that are the closest Iglesias comes to presenting a theme. Over this he slowly layers strings and low, wordless, male vocals as we watch Justin bury his wife.

The Constant Gardener is not an action/adventure film, but a very serious, grim, story and is, unfortunately, based heavily on fact. Iglesias\' music works well in the film and helps move a few slow scenes along, but it is less impressive on album. The music never really rises above a minimal underscore and there is no thematic development. I had expected some sort of "Tessa\'s Theme" to distinguish flashbacks and Justin\'s memories of her from his own search through Africa. Not every film score needs a main theme, but I think The Constant Gardener could have benefited from a unifying musical idea, even if it were just a vocal performance that appeared in various places throughout the film, which was done in Tears of the Sun. Overall, Iglesias\' music complimented the images on screen nicely, but falls short as an album release.