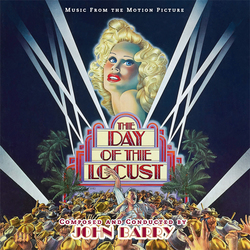 The Day of the Locust - Expanded

One Barry's strongest and most unusual scores. Just as Jerry Goldsmith had on Chinatown, Barry had to find a musical language somewhere between his contemporary style and the period feel of the film, while working around a number of vintage songs that set the tone and provided unsettling commentary of their own. Ultimately John Barry's score mixes subdued romantic writing with period approaches.