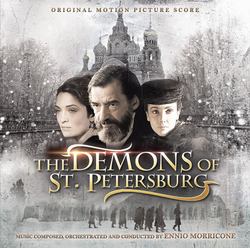 The Demons of St. Petersburg

Helming its most ambitious release to date, KeepMoving Records presents the premiere release of The Demons of St. Petersburg by the legendary Ennio Morricone.

The Demons of St. Petersburg marks the latest collaboration between Montaldo and Morricone who had scored the majority of the director's films. The key thematic material includes the propulsive anarchist theme for the assassination plot and a darkly passionate love theme for a string quartet and harp which underscores Dostoyevsky's troubled relationship with his stenographist, Anna. The flashbacks to Siberia represent the plight of the imprisoned people of Russia whose pain is sung by soprano of Paola Cecchi. The music was recorded at Forum Village in Rome and is conducted by the composer.

This CD by KeepMoving Records marks the premiere release of The Demons of St. Petersburg, which hasn't been issued in any form, not even on compilation albums. During the production of this album we've been granted access to the original album master which Morricone had selected and edited together for inclusion on a soundtrack that never materialized... until now. Featuring all the major cues, some unused moments and even a track recorded especially for the album, The Demons of St. Petersburg fills in an important hole in the composer's discography. The album is rounded out by extensive liner notes from co-producer Gergely Hubai who discusses the film, the score and the road to releasing the album.