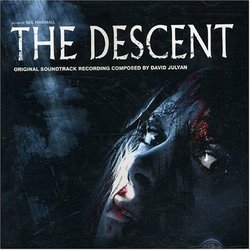 David Julyan, who often collaborates with director Christopher Nolan (Memento, Insomnia, and the upcoming The Prestige), provided the score for Neil Marshall\'s (Dog Soldiers) latest horror film, The Descent. Entering pre-production at the same time as 2005\'s The Cave, this British spelunking horror film takes a grittier, more claustrophobic and realistic look at caves... and the creepy things that prey on hapless cavers. The underscore for The Descent is also a step up from Reinhold Heil and Johnny Klimek\'s droning score for The Cave.

The album opens with a calm trumpet solo that builds into a majestic cue in "White Water Rafting". "Mountains" continues this idea of slowly swelling brass notes with an orchestral sound, underlain by an ominous tone. "Into the Cavern" begins with this main theme, but drops off to a darker undertone that segues into "Down the Pipe", which is a very unique cue with a piano playing a slow beat in an upper octave. A louder cue, "The Bone Dam", features some low brass riffs before an ethereal tone takes over. A quiet version of the theme returns in "Reunited with Juno" and again in "Sarah Finds Beth". I like how Julyan adds a very soft touch of French horn to the theme for color. It is not an easily recognizable theme; it is more apparent from the change in tone when it is played. It is used infrequently, but the fact that he has a theme and does not limit its use to the prologue and end credits helps keep the score cohesive.

There is a limit to what a composer can do with a horror flick set in a dark cave, but Julyan is able to pull off an interesting score, nonetheless. A number of cues have an ambient feel to them, because that heightens the suspense on screen ("Opening" and "Drive to the Cave"). However, Julyan keeps the score from becoming tedious by adding louder bursts of music, which happens at the end of "The Tunnel Collapses" and "Crossing the Crevasse", which features some intricate low string work. "The Crawlers Attack" adds a new element to the score: heavy percussion, kind of like what Mark Thomas used for scenes of Dog Soldiers. A bit of trombone in the background, this cue stands out on the album. It is followed by "The Descent", which is a finale cue that features a full orchestra, extended statement of the theme. Like The Cave, the album could benefit from a few cuts to keep the quieter moments to a minimum, as some are barely audible. Nevertheless, this score is very appropriate for the film, and also has some interesting moments on album.