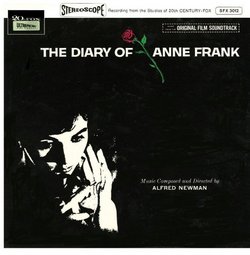 The Diary of Anne Frank

The Diary of Anne Frank (which was nominated for an Academy Award), occupies a special place in the hearts of Alfred Newman fans, and not just because the story on screen that it accompanies is so heart-rending and enduring. Contrary to what one might expect of a movie set in The Holocaust, the music to the film is lyrical, even on occasion lighthearted; as Newman put it, "…the music would be motivated by high ideals, the tenderness and spiritual qualities inherent in their family life and their special badge of courage."

Indeed, the humanity that has made the diary of Anne Frank one of the most profound documents to survive The Holocaust is expressed in every note Newman wrote for the film. Real Gone Music proudly presents the original stereo film soundtrack album for the first time on legitimate CD with the original album artwork and new liner notes.