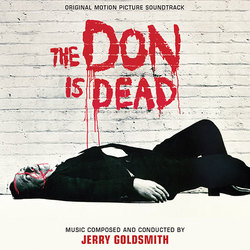 The Don Is Dead

Intrada's latest release features Jerry Goldsmith's score to the 1973 Universal Pictures film The Don is Dead. Following Intrada's earlier release this year of Take Her, She's Mine, Don is also a score never before released. Like other Goldsmith's scores of the period such as A Step Out of Line, the composer chose a lean, gritty, percussive apporach, focusing on the suspense and tension of the proceedings. On top of the orchestra, Goldsmith introduces a lone, pulsating electronic motif to complete the natural acousitics, performed on stage live with the orchestra. The electronics provide a prominent rhythmic figure used during suspense scenes that build slowly and climax in exciting bursts of orchestral violence. Although a mafia film, sandwiched in between releases of The Godfather and The Godfather: Part II, Goldsmith offers no sweeping traditional Italian melodies like those films, but rather a more subtle theme for guitar and flute introduced later in the film. The film's love theme, "Our Last Night" is first heard in a vocal arrangement, on which Goldsmith collaborated with his wife, Carol.

This Intrada presentation of the complete score was mixed, edited and mastered from the ˝" three-channel scoring session masters, stored in pristine condition within the Universal vaults.

Based on a novel by Marvin H. Albert, The Don Is Dead, the complex story had three young mob players - hot-headed Frank Regalbuto (Robert Forster) and brothers Tony (Frederic Forrest) and Vince (Al Lettieri) Fargo - becoming involved in a power struggle when Frank's father, head of a mafia crime syndicate, dies and Frank is passed over for leadership in favor of elder statesman Don Angelo DiMorra (Anthony Quinn). Scheming capo Luigi Orlando (Charles Cioffi) and his greedy wife, Marie (Jo Anne Meredith), urge Frank's girlfriend Ruby (Angel Tompkins), a would-be singer, to approach DiMorra for career help—and Ruby understands that seducing the lonely Don is the fast track to getting him in her corner. When a mysterious source leads the jealous Frank to an apartment Ruby shares with DiMorra, Frank goes berserk and beats Ruby brutally enough to put her in the hospital, pitting himself and his partners against the powerful Don DiMorra while Orlando and his wife wait to pick the spoils of the gang war.