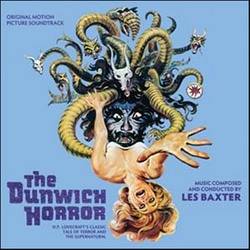 Baxter's acclaimed score, anchored by an infectious main theme, whisks the listener away in a lush soundscape, tinged with psychedelic motifs, electronics and rock. The original LP assembly is presented here, remastered, and supplemented with more than 20 minutes of BONUS TRACKS, obtained from the Les Baxter estate, containing previously unreleased original Dunwich score cues—several of them not used in the finished film. CD produced by Ford A. Thaxton. CD Booklet features in-depth liner notes by Jeff Bond. This is a limited edition of only 1200 Units.