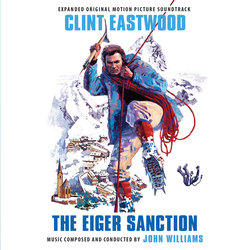 Intrada's latest release features a 2-CD set of John Williams' music for the 1975 Universal Pictures thriller The Eiger Sanction.The score is a masterful example of the composer's 1970s style, encompassing orchestral and jazz elements, tonal and atonal moments, and memorable themes. From the foreboding theme of the main title to the thrilling action of "The Car Chase" and the majestic "The Top Of The World," the score is a showcase of a composer who was rapidly rising to the top of the industry's game.

The first disc features his complete 75-minute score, offering substantially more music than was represented on the MCA LP, a re-recording that also included tracks often substantially reworked by Williams. While the original scoring sessions were in three-track split-mono, ace producer Mike Matessino has mixed the tracks into a satisfying stereo experience, similar to his prior work on Williams' Earthquake. For the MCA album, Universal Music Group unearthed the original 2″ unmixed multitrack tapes, not only allowing for a state of the art new mix to showcase more detail than ever heard before, but also revealing several additional tracks WIlliams recorded for the album but which were not ultimately included on the LP release.