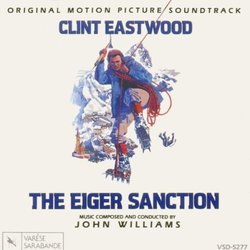 by David A. Koran June 23, 2001
2.5 / 5 Stars
I’ve been meaning to catch How To Steal A Million and this film for quite some time just to get a listen to some John Williams well before the era of Jaws and Star Wars. The first not having a CD release of yet makes it harder to catch a listen to, but the latter I’ve had on a relatively hard to find Varese Sarabande CD for quite some time and enjoyed some of the kind of John Williams audiences don’t hear nowadays. After catching The Eiger Sanction on a late night showing on Encore, I’d have to say that there are some films that are worth a one time watch but nothing more. This totally politically incorrect film stars Clint Eastwood as a retired government assassin to come back for one last hit but finds himself dragged into revenging a colleagues death. Having Williams score a film with these themes seems totally out of place given his recent contributions on films like The Patriot and The Phantom Menance but was in line with his big star attachments to ones like The Towering Inferno and Cinderella Liberty in that period.

The music that John Williams generated for this film was not your typical John Barry-esque spy music heard in the Bond films but rather the subtleties of scores like Cinderella Liberty and The Paper Chase. Clint Eastwood called upon Williams to provide his talents as a classical film composer and from his past as a jazz musician to produce a very solid score. Besides working with Dee Barton on Play Misty For Me and Lalo Schifrin on Dirty Harry, Eastwood has a propensity to call on composers with a strong jazz and classical background. This is even more evident with his long time relationship with composer and musician Lennie Niehaus on most of Eastwood’s own films during the past twenty years. Williams own score fits with Eastwood’s performance on screen by providing an excellent and dynamic underscore for the film. The only real detraction from the score is that the instrumentation places it in a somewhat restricted timeframe, but it only occurs in a few small parts. Overall it’s an excellent Williams score, often overlooked and ignored due to the lack of actual recognition of the film it accompanied. With character names like Jemima Brown, lines like "screw Marlon Brando," and straight forward, in your face violence, one could understand that this film never makes a regular appearance on network T.V..

If you can find this CD in a used bin or even at an on-line retailer and are a fan of John Williams but are looking for something just a bit different, I suggest this CD wholeheartedly. Once again, it displays the diversity of the man credited often with rekindling the interest in film music, and show that there existed great film scores before 1977. As for the film, if you can catch it, it shows that a 50 year old Clint Eastwood can portray a 30 year old man in1975 and make it look believable (so playing a 60 year-old in Space Cowboys wasn’t as far a stretch as people think). Also, for purists, Clint did his own mountain climbing stunts, a rarity in films nowadays with digital video and effects composition.