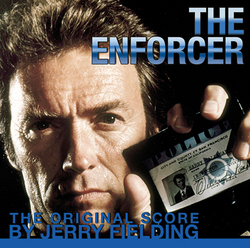 Thanks goodness for Lalo Schifrin\'s heavy work schedule. Had not Schifrin been so busy around late 1975 Jerry Fielding may not have been signed up to score the third Harry Callahan opus. Not that Schifrin\'s score would have been bad, but the world would been a poorer place had Fielding not been given the chance to score a Clint Eastwood cop film in the mid seventies. Oddly denied a release in 1976, it\'s now a pleasure to see this score appear on Schifrin\'s own Aleph Records label.

1976\'s The Enforcer marks the tipping point of the Callahan franchise from classic thrillers to crowd-pleasing hokum, falling somewhere between the two. The film is competently if a little flatly directed by Malpaso in-house Second Unit director Jim Fargo, though rumour has it Eastwood\'s guiding hand was brought to bear on some of the more complex set pieces.

Coming off the back of The Super Cops, The Outfit and The Killer Elite, Jerry Fielding was an ideal choice to continue Schifrin\'s legacy and inject some much needed contemporary muscle to the rather incredible plot. Although IMDB places this after The Outlaw Josey Wales, I\'m fairly sure this was scored first and marked the beginning of another of Jerry Fielding\'s fertile director/composer relationships, which started with Sam Peckinpah and continued with Michael Winner. It would appear that he responded with his best work when motivated by a director he respected.

Eastwood has always favoured composers with a similar jazz sensibility to his own (Schifrin, Dee Barton, Lennie Niehous) and Fielding\'s own jazz background was perfectly deployed here. Using a palette of immediately identifiable motifs that he had honed in the six years since The Wild Bunch, his take on Harry Callahan is cooler, more relaxed, more in keeping with the cool iconography of Dirty Harry rather than the isolated remoteness of his character in Magnum Force.

Veering from hip soul-inflected riffs to reflect Bobby Maxwell\'s gang of counter culture hippy/terrorists to full blown high spirited big band jazz to reflect Callahan\'s more mature but no less hip symbolism, the core of the score is undoubtedly the six minute "Rooftop Chase", a wildly exuberant cue that perfectly splices the two styles in a propulsive blast of underscore that elevates the titular scene to the levels Fargo could never have hoped to achieve. Writing this score must have given Fielding a huge dose of encouragement to use jazz in a purer form to create effective underscore, as he went on to write a pure jazz score for Eastwood on The Gauntlet (with a huge nod to Miles Davis\' "Sketches of Spain").

Equally at home with the darker, tense requirements of the far-fetched plot, Fielding resorts to taut, urban-thriller cues for sustained strings, synthesiser and Goldsmith-esque avant-garde passages. These cues are not what the average listener is going to return to this CD for, though it\'s worth noting that they do add emotional depth to Callahan\'s torment at losing another partner. Schifrin had only hinted at the demons that drive such a character, but here, especially in the cue "Death on the Rock" we are allowed to empathise with Callahan\'s loss in a more immediate way than for instance Schifrin\'s scoring of his feelings surrounding the discovery of Scorpio\'s 14 year old victim in Dirty Harry.

Ultimately though, it\'s the slap bang in the middle of the Seventies cop thriller funk and jazz riffs that reward on several levels, and make this a must-have purchase.