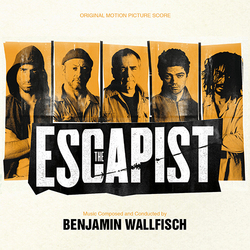 In our second collaboration with composer Benjamin Wallfisch (the first one was Dear Wendy), we present the strikingly original, highly emotional and unusual score he wrote for Rupert Wyatt's acclaimed thriller The Escapist. Our online release of the score co-incides with the British Academy of Songwriters, Composers and Authors (BASCA)'s nomination of the score for the prestigious Ivor Novello Award for Best Original Film Score and follows the US theatrical release of the film.

It is a score that has been singled out by many film reviewers as one of the film s most strikingly effective elements. Building and developing his score around an aggressive main theme in 7/8 meter, Wallfisch juxtaposes elements of heartbreaking beauty with adrenaline-pumping orchestral music and hard-hitting electronica.

The amalgamation of these diverse elements results in a truly unique listening experience both in the film context and on its own!