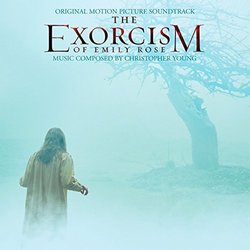 The Exorcism of Emily Rose

Review: Exorcism of Emily Rose, The

Christopher Young returns to his home genre with a dark and subtle score for the psychological horror film that kicked off the 2005 Halloween season very early. The Exorcism of Emily Rose took itself very seriously and its presentation of the real-life story was unnerving, helped in no small part by Young's score. The main component of the music is a droning sound effect that while functional in the film, after listening to the album for a while, starts to grate your nerves. Young also employs other sound effects, such as a fast chaotic set of notes in the strings.

The score works very well in the film and adds a feeling of unease to the creepy and horrifying images on screen. Unfortunately, this review is of the soundtrack, which is a very hard album to listen to. The majority of the tracks are composed of the droning undertone and haunting female vocals by Sara Niemietz. Only in the final two cues does the music rise up into a more orchestral feel and the first full use of Young's thematic work for the film. Unfortunately, given the hour-long album, these final moments are a bit too late. The music is perfect for the film, but as an album, it is difficult to appreciate out of context.