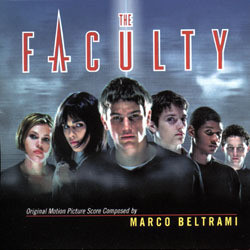 by David A. Koran June 23, 2001
3.5 / 5 Stars
The Faculty is a movie that can be categorized under "guilty pleasures" in my book. I've always enjoyed Robert Rodriguez' movies, no matter how hackneyed and clichéd they end up being. In fact, I think he could direct water dripping out of a faucet and I'm still bound to find time to sit and watch the film. That plain example translates well into The Faculty, which was scored by composer Marco Beltrami, who at the time just finished working on the teen thriller, Scream 2. Being a relative "expert" in scoring teen-themed thrillers, the nod for Beltrami was definitely a bonus for the filmmakers. Marco definitely turned out a somewhat comically creepy score for a comically creepy film, complete with a recognizable theme, which many films nowadays seem to ignore. It’s also a surprisingly melodic score, orchestrated for a very full and complete orchestra, providing and extra "umph" for the film.

Releasing this score as a promotional disc almost guarantees that it will only be heard by the folks who really liked the film and its music and are willing to track down a place to purchase it. A rock song compilation did accompany the film’s initial release but it took Intrada to collaborate with the composer for this score release. Granted, the length only chimes in at less than a thirty (and almost as many tracks to boot), but it encompasses most of the work Beltrami put in the score. Since the album has the large number of tracks coupled with a short running time, many of the selections run into one another without pause. Most, if not all, tracks are out of sequence with the film, but unlike most "purists" it does not detract from the album, but rather adds some surprising consistency within the composition. Marco also moves very deftly between full orchestral work and a neo-electronic rock in such tracks as "Too Cool For School" and "Roof Surfing". Very few composers can slip back and forth so easily and make it sound convincing, they either are stuck in one direction or another. Bits of the score sound like an amalgamation of techniques from the likes of Jerry Goldsmith (Alien) and Danny Elfman (Edward Scissorhands). . There are even some nods to Bernard Herrman (Taxi Driver / Psycho) at points in tracks such as "She’s A Breeder", "Deck The Halls" and "Pop, Pop, Fizz, Fizz", showing a sense of musical maturity in such an early stage in his career. This is pretty good praise for an up and coming composer, and I hope Mr. Beltrami keeps up the effort on future films, no matter how cheesy the project may be.