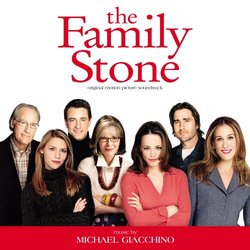 What is a Christmas score without sleigh bells? The Family Stone is what I\'d answer.

Yes, there are sleigh bells in Michael Giacchino\'s score to 2005\'s Family Stone, but it\'s not like he\'s hitting people behind the head with them while screaming, "IT\'S CHRISTMAS!". Giacchino, who garnered much acclaim and fame for his extraordinary score to The Incredibles, shows himself capable of capturing the spirit of Christmas without resorting to the by-now clichés of the warm choir and those darn sleigh bells. In its moments of excess, The Family Stone is downright Tchaikovskyian. The album opens with "The Family Stone Waltz", a Nutcracker-esque triple meter introduction to the main theme. This waltz is the sort of melody you find yourself humming while putting up the Christmas tree. Giacchino has a lot of fun passing the multiple phrases of the theme to the various members of the 75-piece orchestra he assembled. The theme is shifted to a quadruple-meter march in "Main Theme (Alternate)", which tones down the wacky but shows how resilient and flexible Giacchino\'s family theme is.

Other cues show Giacchino following in the footsteps of that famous Russian composer, with "Separate Rooms" playing off of "The Dance of the Sugar Plum Fairy" and "What Seems to Be the Problem Here, Ma\'am?" containing simultaneous trills on woodwinds and strings over an oom-pah accompaniment. It\'s easy to be misled by those pieces into thinking the whole score functions as a jolly orchestral romp worthy of the Nutcracker. Most of the cues offer soft, introspective moments, such as "Coffee or Something" and "Who Else Knows?", which are satisfied with a simple series of piano chords over a basic string support. "Is That Her?" gives us a mellow woodwind rendition of the Family Stone Theme, while "It\'s Snowing" is built on a secondary theme which blooms into a wintry climax with just a dash of Americana. The album never quite lives up to the promises of the introductory waltz, but Giacchino\'s Family Stone brew is spiked with just enough craftsmanship and personality to place it in a league above the usual holiday syrup.

While The Incredibles was exhilarating, The Family Stone is merely solid. Still, there are only so many ways a Christmas score can be baked and props to Giacchino for keeping away from the all-too-easy eggnog of the musical holiday world: those cheery, shakety-shake sleigh bells.