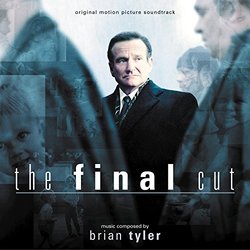 Brian Tyler, known for his bold, brassy themes from Children of Dune and Timeline, presents his subtler side and clearly shows his growth as a composer. Where Darkness Falls allowed him to unleash orchestral sound on a massive scale, The Final Cut shows Tyler's maturity and restraint. While not as thematically developed as Frailty, The Final Cut as an album is more cohesive than Tyler's other scores, almost to the point of sounding like a classical production. Despite the return of his usual orchestrators, Robert Elhai and Dana Niu, The Final Cut has a very different sound for Tyler. Lightly layered strings and piano, cello, violin, and woodwind solos move the score quickly and yet with self-control. One of the most interesting features of this approach is the layering of French horn lines beneath parts of the music, as in the main title and "Alan's Memory".

Like Don Davis' work for The Matrix, Tyler takes a postmodern approach to parts of this score, often using motifs rather than melodies as themes, one being repeated cyclical arpeggios on acoustic guitar, violin, and even marimba ("Zoe Revelation", "Eye Tech"). There are some darker moments to the score, where Tyler uses timpani and low strings ("Desperate Pursuit"), yet remains consistent with the rhythms and motifs. The music ranges from multiple layers of light orchestrations, as in the main title, to a nearly inaudible solo piano ("Absolution"). The use of marimba, acoustic guitar, and bass clarinet in cues such as "Eye Tech" give parts of the score an eerie sense of motion while still maintaining a soft tone. The music does take on a darker feel at times, as in "Tattoo Parlor" where a heavier drum and soft woodwind take over for the strings.

The main theme is simple, little more than a motif, and most often played on the piano, but Tyler weaves it into the music so often and so well that it pops up in unexpected places, even after numerous listens. The highlight of the album is "Alan the Cutter" where all the thematic and rhythmic elements come together with a darker, more frantic tone, underscored again by brass, then adding marimba and woodwinds. The album closes with a haunting cello solo backed by the piano in "Rememory" before the end title cue restates the main theme. The album also includes two songs, both co-written by Tyler. "Enchanted Days" is a jazzy tune voiced by Kathryn Bostic, completely opposite of the hard rock song, "Hollow". Neither adds much to the album, but do feature some resemblance to Tyler's themes. Tyler also performed drums, guitar, and vocals for "Hollow". With each score, Tyler brings out a new style and is clearly showing his strength and growth as a composer. The Final Cut is subtler than much of his past work, but is a strong, cohesive work that takes the composer's skill to a new level.