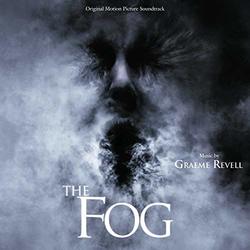 Graeme Revell\'s score for The Fog is the type of music that is well-suited to the film it accompanies, but is difficult to listen to on album. The reason for this is the content of the film. The Fog is a dark film where there are times that little can be seen, hence the fog. Revell\'s music worked to highlight the parts that should be startling and add a creepy color to the film at the same time. He uses chimes and upper octave piano solos mixed with rumbling ambient electronics. Revell\'s more recent work has been collaborations with other composers for director Robert Rodriguez. For his recent solo scores, I have found it to be somewhat disappointing when compared to some of his work over the past few years such as Titan AE, The Chronicles of Riddick, or The Crow. I think this has more to do with the nature of the projects he is taking on rather than his abilities.

I find that a large amount of the music for The Fog sounds like a dark CSI episode (Revell had scored the first season of "CSI: Miami"). "Shower Love" and other short cues are comprised of pulsing electronics similar to what is often heard for the opening shots of Miami. The main theme for The Fog is performed on the piano above the dark, droning electronics in nearly every cue, but it rarely takes on any other form. Like much of his recent work, The Fog is functional and works well in the film to highlight the darker or more starling moments. Unfortunately, a film like The Fog that needs music to help illustrate the story, since much is hidden by the fog, the score could have been better with a greater variety of sounds. The most varied cue is "Prologue" which throws in a bit of horn under the electronics for added color. Overall, there are better Revell scores, though I have to say that his music is still very fitting to the films he scores.