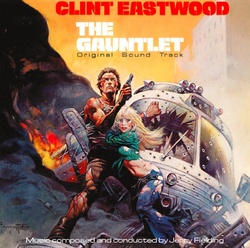 Perseverance Records is proud to announce the reissue of the soundtrack to Clint Eastwood's 1977 action film, The Gauntlet.

Jerry Fielding has collaborated with Clint Eastwood on four films and has worked with some other great directors in his career (Peckinpah, Preminger, Irwin Allen, Michael Ritchie) as well as on numerous television series.

• The masters sound really good. As with the album for The Exorcist II, Warner Music remastered this for us.
• Liner notes by Fielding authority Nick Redman.
• This is a straight reissue using the track listing from the original LP and the Warner France CD. It is a great representation of the score from the film.
• Priced to sell at $12.98. There will only be 3,000 copies manufactured. We will not make any more after we reach that total.
• We used the original artwork on this the same way we did for Exorcist II. We love the look of the CD as it brings back the original LP's front and back graphics.