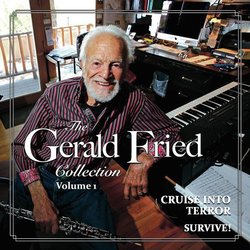 Airing on television in 1978, Cruise Into Terror tells the story of the son of Satan hitching a ride inside an Egyptian sarcophagus and causing havoc when shipped as cargo on a pleasure cruise ship. The story as written has a kind of a Love Boat Meets Hellraiser kind of sensibility, although much less frightening. To score the film, Fried utilized an approach he had favored in the horror films he scored during the '50s: paraphrasing from traditional material, which included the Dies Irae , a medieval plainsong chant that is one of the most quoted in musical literature, appearing in numerous classical compositions and film scores alike. Fried recorded the score with a 40-piece orchestra, as he recalls, which gave a sense of size and assertion to the music as the film plays out.

Released in 1976, Survive! is a Mexican film released under the Spanish title Supervivientes de los Andes (Survivors Of The Andes) and tells the true story of the crash of Uruguayan Air Force Flight 571, which was chartered to carry the country's rugby team to a match in Santiago, Chile when it crashed in the Andes Mountains. Rescuers could not find the crash site as the plane was far off course when it plowed into snow and rock on a mountainside; without food, survivors had to choose between starvation and eating the flesh of the dead; of the 45 persons on board the plane, 33 initially survived the crash, but only 16 would survive to be rescued after 72 days on the mountain top, trapped by injuries, lack of food, and severe weather, with only the aircraft's torn fuselage for shelter. The tragedy was later filmed by Frank Marshall as Alive (1993).

The original Mexican version of the film was released in January 1976, and featured a relatively sparse score by Mexican composer Raul Lavista. An edited English language version was adapted by Paramount and released in the United States in August 1976, presented by Allan Carr and Robert Stigwood; for this version Gerald Fried was brought in to compose a new score for the American edit of the movie. Fried composed a sizeable score that perfectly fit the storyline and set the tone for its dramatic and controversial situations.

Dragon's Domain Records presents The Gerald Fried Collection, Volume 1, featuring music composed by Gerald Fried for Cruise Into Terror and Survive! for the first time on compact disc. The music has been mastered by James Nelson at Digital Outland and the liner notes have been written by noted author Randall Larson.