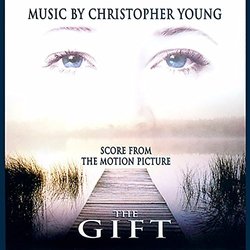 From works as varied as Murder In The First, Hellraiser, and Rounders, Christopher Young has always been something of a musical chameleon. While some composers frustratingly never sound any different (you know their names, and I don't want their hate mail), one could almost argue that no two Young scores sound alike. Ever intelligent and always classy, Young consistently steps in and perfectly supports the picture at hand. The only unfortunate side effect of this is that, divorced from the film, Young's music doesn't always make the most engaging album. I remember loving his score to the abysmal Bless The Child in the film, only to come away a little cold when I heard it on CD.

Such is the only perceivable shortcoming of Young's score to The Gift, director Sam Raimi's absorbing vision of Billy Bob Thornton and Tom Epperson's southern-fried ghost story. In context, Young's use of a lonely solo fiddle over moody orchestrations impeccably reflects the feelings of psychic mom Annie Wilson (an absolutely stunning performance by Cate Blanchett) as she faces the disbelief and scorn of the local townsfolk. On Will Records' fifty-minute CD, however, this same music loses some vital steam.

Young seems to realize this, front-loading the album with two of the best cues, "The Gift" (the main titles) and "She Was A Friend To Me". The latter is a heartbreaking elegy for the relationship between Annie and Buddy, Giovanni Ribisi's emotionally disturbed young auto mechanic. Young's sensitivity to the film's characters is undeniable, and his score is a major highlight of an already compelling movie. But on disc, after these first two powerhouse tracks, the album begins a long and turgid stretch of effectively atmospheric cues that never engage as much as you might have hoped.

That being said, the thought and craft that went into this music is evident in "Cryptomnesia", an unsettling question-and-answer session between the jittery solo fiddle and the rest of the players. Weird Cajun voodoo drums and skittering shakers frequently lurk in the background, effectively adding to the creepiness. "Fiddler Dream" is also something of a standout, with its plodding suspense and frightening musical attacks. But the album doesn't truly perk up again until the very end with "Empathy", a restatement of the more sympathetic and emotional aspects of the score and film.

No doubt about it, this is an effective score, if not the most amazing listening experience. Fans of Young and the film (as well as Terence Blanchard's Eve's Bayou) should find enough here to keep themselves interested. But armchair score fans might best see the film first and then decide if the album is either meticulously well done or a little boring. For myself, it is a little bit of both.