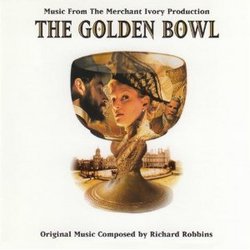 In The Golden Bowl the aristocracy so prevalent in the Merchant-Ivory films of yore (A Room With A View, Howard's End) is once again revisited, and filled with high-class actors.  Based on Henry James' novel of the same name, the story focuses on the love affair between Charlotte (Uma Thurman) and Amerigo (Jeremy Northam), who is about to marry Charlotte's rich friend Maggie (Kate Beckinsale).  Of course, Charlotte doesn't want the affair to end, so she shows up to the wedding.  As a gift, she gives them a seemingly perfect golden bowl, but it actually has a tiny crack.  (Metaphor, anyone?)  The dramatic and richly orchestral score was composed by Merchant-Ivory veteran composer Richard Robbins.

The "Opening Credits" begins rather slow and romantic, much like a John Barry score. However the lushness of the orchestra suddenly turns to harsh brass and tension, completely throwing the listener off base.  It's stirring and surprising, and quite good.  Much of the score is romance-based, and as such is soft and lush.  A regal chords sequence starts up "Lancaster House," but it quickly moves into "Lady Gwendolyn's Galop," a rather upbeat ditty that seems just a bit too playful considering the rest of the score. However, it's a delightful number, and quite satisfying to listen to.

The drama and tension begin to build throughout the rest of the score, and the more romantic themes start to take on a slightly dangerous edge.  "The Golden Slave" is more underscore, with orchestra hits accentuating the ever-building tension.  Tragedy is felt in "The Broken Bowl," and "The Letter / The Execution / Henry VIII."  But it's the "End Credits" cue that felt just a little out of place. Having come from a soft and quiet somber piece ("To American City") that fits well into the rest of the score, it suddenly moves into a cue that is more like a Scott Joplin inspired ragtime bit than a Richard Robbins score!  Granted it's enjoyable, and does fit within the time-frame of the film—but it just felt a bit off considering the rest of the material on the album.

As with any period drama, the score is rather important to conveying the character's emotions and state of mind.  To that effect, The Golden Bowl works nicely.  It's a strong score, and my only real complaint is that the album felt a bit long—much of the music tends to run together, and I found myself with an urge to skip over a few tracks just because it felt as though I had heard them before.  Still, it's worth checking out if you enjoy Robbin's work.