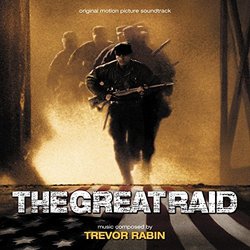 Trevor Rabin had been somewhat quiet over the past few years until National Treasure back in November. Given that film\'s jumble of expected synth cues, I was apprehensive about how Rabin\'s style would fit into a serious war film, The Great Raid. The former Yes guitarist\'s typical Bruckheimer style of action scoring wasn\'t quite the sound necessary for this film. If one was only recalling electronically infused noise of The One or Bad Boys II, one might fear the outcome. But Rabin has written some remarkable film music, namely for Armageddon, Deep Blue Sea, and Remember the Titans. His style of orchestration is bold and he is very capable of using his main theme. These are the traits that come out in his score for The Great Raid.

Rabin\'s score for The Great Raid is, in a word, surprising. Fully orchestral, there is only one cue where even an acoustic guitar can be heard (performing a Deep Blue Sea-esque motif). Rabin\'s use of brass and percussion truly makes the score and gives the film the much required sense of patriotism. Rabin\'s work on American Outlaws and Remember the Titans bear the closest resemblance to his newest score in style (brass and snare), but The Great Raid goes above and beyond that. While his style remains "Rabin" - certain brass motifs and percussion beats are easily recognizable as his - the overall sound of the film, especially for the sweeping performances of the main theme, breaks away from Zimmer\'s war film styles (Thin Red Line, Black Hawk Down, Pearl Harbor) and sounds most like John Williams\' Saving Private Ryan or The Patriot with solo brass and soft choral orchestrations backed by moving snare rhythms and even the occasional flute solo thrown in.

The album opens with "The Rescue" which presents the main theme in the French horns with string accompaniment and some quiet, sweeping variations on the theme. The last minute of the track picks up the pace with the snares and performs the full theme with the trumpets and pounding percussion. The remaining cues juggle solo brass, cello, choir, and flute performances as soft background music for the events in the film leading up to the raid. There is some tenser music occasionally, but it keeps the album from getting dull.

To be honest, I have to say that this is one of, if not, Rabin\'s best work, partly due to the fact that it is nearly entirely orchestral. Additionally, much of the music is performed by little more than solo instruments. His theme is rousing and inspiring, and at the same time sorrowful, and delivers the perfect sound for the film. Having seen the film, I noticed that the music was rarely overpowering (which is rare for many of Rabin\'s scores) and was only noticeable at key points when the theme powered up. Rabin showed both restraint and subtlety with his orchestrations without losing the boldness of the music. While this score has a similar sound to other war film scores, Rabin\'s own stylistic touches, such as racing string lines behind the theme, make it a refreshing listen. The recording is crystal clear and highlights the sharp brass solos that permeate the score. The album tracks are out of film order but make for an enjoyable listen. It is wonderful to see Rabin move away from action films. For a war film, The Great Raid is slow, but Rabin took advantage of that to flesh out the majestic sound of his score.