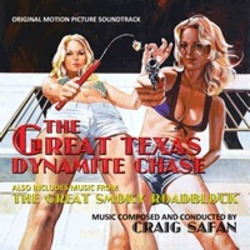 To score The Great Smokey Roadblock, composer Craig Safan wrote a score that mixes blue grass, country blues and Coplandesque Americana that paves the way for Elegant John's final run for freedom. One of the highlights of the score is the main title, modeled after Aaron Copland's Appalachian Spring. The composer recorded the piece with a string quartet, three woodwinds, horn, trumpet, percussion, bass and piano (which he played himself). The Great Smokey Roadblock also contains one of Safan's favorite compositions, a theme for Beebo, who is characterized by a jaunty sidestepping melody on dobro. For Fonda's character and the dramatic action in the film, the composer takes a more classical approach.

The Great Smokey Roadblock / The Great Texas Dynamite Chase is a limited edition release of 1000 units.