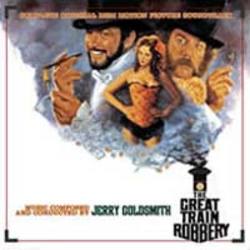 Goldsmith also recorded all of his classical source pieces during the sessions and we include those as well. His take on Handel's famed "Music For the Royal Fireworks" is dazzling indeed. Several alternates were present on masters, including early take on classic "The Gold Arrives" set piece, this time with central section spotlighting virtuoso trumpet double-tongue passage. Goldsmith ultimately toned down for final take.