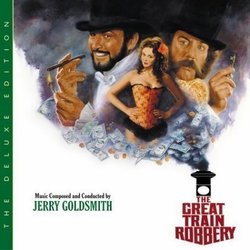 Performed by
The National Symphony Orchestra

1979's The Great Train Robbery came out in Jerry Goldsmith's most creative period (1976 – 1985) when much of his best work was produced (including The Omen, Alien, Star Trek: The Motion Picture, Outland, First Blood, Poltergeist, Twilight Zone: The Movie, Under Fire, Supergirl, Gremlins, Explorers, and Legend). It's a legendary list and in terms of impact, only bested by John Williams' run during the same period. The movie is based on the great historical crime novel by writer/director Michael Crichton, who had just worked with Goldsmith on Coma together just a year before.

The story follows the true-life exploits of a daring 1855 robbery of a gold transport train while the train was in transit. The film is meant to be a breezy ride and the music compliments in kind. Thematically this is a very simple score - heist movies are generally not emotionally complicated. They are about the mechanics of the heist and the craft with which the characters pull it off. There are few musical themes here and little subtext. It is the variations of the delightful main theme ("Main Title") that make the album a wonderful listen. The theme emulates the rhythm of a racing locomotive (the strings and horns play in a repetitively circular pattern, representing the rotating wheels and turning pistons while the trumpets are the trains whistle) be it when the music is in full fanfare ("The Gold Arrives") or subtly suggested ("Double Wax Job"). Compliment that with some fantastic suspense cues ("Over The Wall","Kiddie Kaper"), light pastoral comedy cues ("Clues ","No Respectable Gentleman") and Goldsmith's deftly constructs a pitch perfect score without a single false note.

The original vinyl release was released on CD as a double bill with Wild Rovers but that release has been out-of-print for a while. This new album has a few tracks not previously available and sounds better than ever, and as an extra bonus, is a hybrid SACD for multi-channel sound. Unfortunately, as indicated in the detailed liner notes, one major action cue was missing from the 24-track masters. I have a short list of albums I have been waiting years to be released in full glory and this is one of them. A must get.