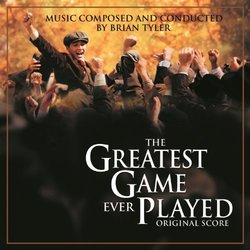 The Greatest Game Ever Played

Review: Greatest Game Ever Played, The

Brian Tyler\'s haunting score for Bill Paxton\'s directorial debut, Frailty, in 2001 remains one of my favorite suspense scores. Launching Brian Tyler\'s career into mainstream film, and receiving praise for both the film and the score, it only makes sense that Paxton would turn to Tyler again for his second film, The Greatest Game Ever Played. Tyler\'s skill and ability to write for any genre again created an exhilarating and majestic musical accompaniment for Francis Ouimet\'s victory at the 1913 U.S. Open.

Tyler\'s main theme is a sweeping melody performed mainly by the strings with a few treatments for the piano. The tone of the score takes the listener back in time to the early 1900\'s in a similar style to Horner\'s Legends of the Fall and Badelt\'s Time Machine. Tyler uses this theme throughout the entire score, but what keeps the music interesting is his addition of numerous motifs that he also weaves in and out. "Immigrant\'s Theme" is a upbeat cue for acoustic strings and flute. "Ride the High Country" is an upbeat period piece styled almost like a Western, and is given a reprise later on the album. A common motif that follows the main theme and often underlies other themes is a simple chord progression, which acts to tie musical elements together. My favorite theme is a fast-paced, moving string line that is played under the chord progression and gives the music a needed sense of motion at key points in the film ("Main Title Suite", "The Game is Afoot").

The cue "The Greatest Game Ever Played" contains one of the grandest and most drawn out performance of the main theme, which is only matched by the finale performance in "Sunset" that demonstrates Tyler\'s skill at layering music. The score contains mostly strings, guitar, and piano, but brass and percussion make brief appearances as well. A good example of this is one of the best, though short, cues on the album, "A Call to Arms", which contains the chord progression that plays over horn, strings, choir, and marching snare, which is followed by heavier drums.

The album from Hollywood Records is a typical Tyler release with numerous short cues and both a main title and an end title suite. This suite opens with a horn performance of the main theme, then breaks into a moving cue that reprises all the major themes. The album also contains three songs from the period, which have no tie to Tyler\'s score, but are appropriate for the setting of the film.