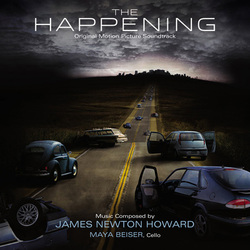 I really like M. Night Shyamalan\'s films, and while The Happening wasn\'t his best, I did not find it to be as bad as most reviews made it out to be. I\'m not sure he could make a film critics would like; they just seem to want to hate him. While there are admittedly some problems with certain aspects, his projects take a small-scale look at the world through the eyes of a group of people. This is a refreshing effect, given the scale of computer graphics in modern cinema. Additionally, his ideas often attempt to show realistic portrayals of film genres, such as superheroes, alien invasions, and bioterrorism. But above all else, the films are about his characters rather than the events. Each of Shyamalan\'s movies also benefit from the musical talent of James Newton Howard, which have gotten better with each outing. While the score for The Happening is more restrained than their recent collaborations, it is no less effective.

Following two years after the orchestral masterpiece of Lady in the Water, Howard\'s The Happening is more of a combination of Signs and The Village, using a series of motifs that build upon each other as an underscore for a solo cello performed by Maya Beiser. The main theme is a rhythmic cello motif of three notes followed by a trill to the fourth note. This is primarily performed by solo cello or violin and piano and is introduced in the "Main Title". Another strong statement of the theme is on the piano in "Central Park" where hand percussion adds to the creepy effect along with a tuba and bassoon providing the underscore. The theme and orchestrations progress along with the film and the escalation of the events. In "My Firearm is My Friend", a trumpet takes over the main theme followed by a French horn. Soft choir and chilling strings add additional elements to the musical fabric. The theme is simple, with the same note for the first three beats. But when it is performed by the piano, the notes in the chords are not played simultaneously. They fall at very slightly different times, making the chords seem disjointed and unnerving. It is a very effective technique for this film ("Princeton").

While Hilary Hahn\'s violin solos added an innocent and optimistic, yet somber tone to The Village, Beiser\'s cello solos here add a very ominous presence. A good example is "Vice Principal". Howard also added other solo instruments that are infrequently heard in the forefront of film music these days.  "Rittenhouse Square" contains blasted low notes on a baritone saxophone along with a tuba beneath the piano theme. A bass clarinet is featured in a similar role in "You Eyein\' My Lemon Drink?". The cello takes over in a seamless shift as the bassline moves forward into a cello solo. Other orchestrational effects include bells and marimba, as heard in "Rittenhouse Square" and "Shotgun".

The climax of the film is accompanied by "Be With You". This is the point in all of Shayamalan\'s films where all of the meandering, random character development points come together to finally make sense (weird quirks, random arguments, hidden abilities, etc). While this finale cue may be no "The Great Eatlon", its full orchestral presence had a strong effect on the end of the film and helped give Elliot\'s decision more weight. We finally get a full string section, which breaks into the main theme alongside the piano. Horns are added for color as full chord progressions take over the creepy main theme and a string line breaks away from the soaring chords.  The piano chords at the end of the cue also all fall on the downbeat. The album ends with the "End Title Suite", which features additional and expanded solos by Beiser. Regardless of how viewers felt about The Happening or M. Night Shayamalan\'s films in general, no one can deny the fact that something about these six films bring out the best of James Newton Howard. While The Happening score is not as enjoyable a listen as Signs, The Village, or Lady in the Water (the latter being among my favorite scores ever), it is an excellent horror score that effectively weaves through the film and accentuates the creepy, horrific, and tender scenes.