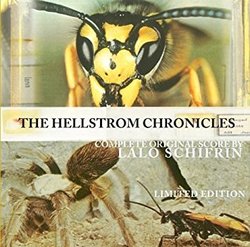 Back in the early 70s everyone was afraid of everything. The Hellstrom Chronicle was an offbeat documentary that took advantage of this zeitgeist, with the help of some microphotography, to sell the notion that a final showdown between man and the ferocious and adaptable insects was in the works. Nowadays most people aren't quite as convinced on the whole doom-and-gloom weltanschauung leaving the majority of us stupefied that the sensationalist, alarmist The Hellstrom Chronicle beat out The Sorrow and the Pity for an Oscar. The Hellstrom Chronicle enjoyed inexplicable popularity in its day but now plays like the next installment of Fox's "When Animals Attack". Really the best thing that can be said about The Hellstrom Chronicle is that there don't appear to be any plans for it to be brought out on DVD.

Lalo Schifrin's recently released score sounds pretty much exactly what you would expect from a giant-evil-insects-are-going-to-bite-off-your-head-and-devour-your-children documentary's score. Which isn't to say that Schifrin's score is technically bad...only perhaps a little uninspired; large portions of it sound clichéd to the modern ear. "Horror Montage and the Harvester Ant Community" is a perfect example of this, with its pizzicato strings and abrupt, intermittent percussion; it could be slipped into almost any horror movie's score.

Later tracks begin to evince more variety although the transition from the African tribal inspired drum beat of "African Drums, Moths and Communication" to the 70s TV love theme music that introduces "The Acts of Love" was a little too huge of a jump to sit well with me. Of course, "Acts of Love" itself has problems. It tries to do too much and without the context of the movie it is just bizarre, disjointed, and unsatisfying: tribal drums to 70s dance, electric guitar to harpsichord solo and a few other styles all crammed into a 5:27 track. All of this frenetic energy is followed up by the Glass-esque "Bees, Wasps, and Mayflies", a tremendous change in styles interesting perhaps from a technical perspective but extremely jarring to a listener of the CD. The final tracks return to more familiar horror movie leitmotifs as the harvester ants go on rampage to the accompaniment of angry bow strings, insistent horns, and startling woodwinds ratcheting up the tension in familiar ways.

Schifrin's score is very suitable for the documentary it was written for. The majority of it does a great job of supporting the monster insect gravamen of the original documentary. However, without the film's framing many of the musical choices seem inexplicable to the listener which makes it hard to enjoy the listening experience. After all, the documentary was intended to evoke memories of science fiction monster movies so it is hardly surprising that the score is suggestive of those musical tropes. As Lincoln said, "People who like this sort of thing will find it just the sort of thing they like."