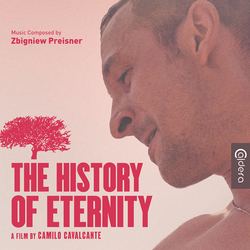 The History of Eternity

Caldera Records is proud to present the score for the motion picture The History of Eternity from 2014, directed by Camilo Cavalcante, featuring music by Zbigniew Preisner.

The History of Eternity tells of not one, but three love stories. The focus is on three women: one of them is a teenager (Débora Ingrid), the second one is in her 40s (Marcélia Cartaxo) while the last one is in her 60s (Zezita Matos). The male cast consists of Bahian musician Léo França playing a blind accordion player. Irandhir Santos portraying a Sertanejo artist suffering from epilepsy. Claudius Jaborandy offers a counterpoint to these artists as a rather pragmatic man more concerned with material goods. The three stories happen simultaneously and intertwine, but are given separate titles: Chicken Foot, Goat Foot and Urubu Foot.

Since two of the three main characters play musicians (and one of them is a musician in real life), it's only natural that music becomes an integral part of the story. Preisner provided music that Cavalcante described as something that lent some Eastern European melancholy to the film. One of the key ideas of the score is using the guitar, which actually ties in together with the story and the usage of songs in the narrative. There is a very strong culture of so-called "Sertanejo" music which could be best described in terms of how country music is regarded in the United States. The score was awarded the Cinema Brazil Grand Prize, the Brazilian Oscar.

The 30th CD-release of Caldera Records features a detailed booklet-text by Gergely Hubai and elegant artwork by Luis Miguel Rojas. The CD was produced by Stephan Eicke and John Elborg.