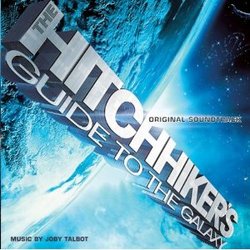 The Hitchhiker's Guide to the Galaxy

Review: Hitchhiker's Guide to the Galaxy, The

Having gone through quite literally every other medium known to man, it took so very, very long for Douglas Adams inspired tale of The Hitchhiker's Guide to the Galaxy to hit the big screen. Despite some truly splendid production design and Henson Creature Shop animatronics that give computer animation a bad name, it's questionable whether the end result was truly worth the wait.

As the updated entry guide itself sums up our own humble planet, the film was on the whole "mostly harmless," but at the very least it paved the way for composer Joby Talbot to tackle his first major feature film score and the result is delightful.

Next to the music, if the film delivered anything else to be grateful for it was the casting of Stephen Fry as the voice of the guide. It is rather fitting then that the album begins with the coming together of Mr Fry and Mr Talbot in "The Dolphins" where we're told of the mammals extended knowledge of Earth's impending doom and how ultimately they become forced to fly off and bid farewell with their parting words of "So Long and Thanks for All the Fish," a song for the purposes of the film, and an amusing nod to the Broadway spectacular penned by Talbot, Garth Jennings and Christopher Austin. A reprise performed by Neil Hannon (Talbot's long term collaborator with the band The Divine Comedy) comes toward the end of the album.

If there's one thing the film couldn't be without it is "Journey of the Sorcerer," the Eagles tune much loved as original theme of The Hitchhiker's Guide to the Galaxy. It comes at a point in the film where you've just about given up hope of ever hearing it when suddenly comes the familiar twang of the banjo leading into a loving rendition that remains true to the original but is not without that "Joby Talbot sound" keeping it consistent with the rest of the score. With the title cue, "The Hitchhiker's Guide to the Galaxy," he continues with another throwback to the television series with some seemingly dated electronics underscoring the first of the film's guide animations (it's difficult not to think back to the days of those dinky little Casio keyboards we'd all played with at one time or another). By the next cue on the album, "Inside the Vogon Ship," the electronics take on a slightly more modern tone with track 14 ("Pan Galactic Gargle Blaster") being the scores most digitally driven piece.

What's particularly nice about the score is that it's not constantly music playing for laughs. Grounding the score are an array of especially charming cues which followers of Talbot's past work will see as no surprise in demonstrating his thematic versatility. "Trillian and Arthur Reunited" is perhaps a fine example of this, a cue that it is bookeneded by what might be classed as upbeat and dare I say it "wacky," yet it carries a beautifully soft centre.

It's the sweeter side of the score that serves to be the most memorable with "Tea in Space," "Love" and "The Whale" being significant highlights. It is tracks 24 and 25 which can be seen as the central standouts however. "Planet Factory Floor" comes as Arthur Dent sees for himself the miraculous wonder of planet building and with a grand sweeping statement the cue captures the character's emotions magnificently.

This is a lengthy album with a number of admittedly short cues, so it is pleasing then that the other standout, "Earth Mark II" would prove to be the longest at over six minutes. There's practically every emotion in the cue from imminent danger through awe and amazement with what can only be described as the score's bittersweet theme which is all finally capped with an adventurous finale.

With Talbot long being in demand on home turf, it is hoped his score for The Hitchhiker's Guide to the galaxy, along with his classical works and his music for The League of Gentlemen's Apocalypse will further his appeal globally. He's a composer worth looking out for, as is this score.