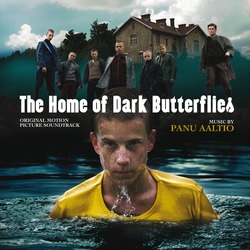 The Home of Dark Butterflies

Panu Aaltio, a native of Finland, is a relative newcomer to the film music industry, but already made an impression with his score to the 2008 drama, Home of Dark Butterflies. This film, about a group of boys in foster care on The Island, is a dark film, both in content and the often cold cinematography, by director Dome Karukoski. Aaltio's score captures this dark tone through the use of minor keys and suspended chords, while maintaining a building tension through a moving bass line in the low strings. What is particularly impressive about this score is its ability to evoke the emotions of the story - tension, anger, hope - independently of the film.

The "Main Title" opens with the moving bass line below a set of chimes. The main theme is then introduced in "Big Plans" on the piano and strings, the two primary components of the score. This theme is used frequently throughout the score in some variation, which adds to the score's impact as a soundtrack album. However, the theme is rarely heard in full between it's first iteration and the finale cues. It can be heard in the strings, as in "The Butterfly Project", or on a solo piano in "Boys Decide to Stay" but the full orchestration of the theme does not appear again until later. Other times, the theme is used only as a series of chords with the moving underscore, as in "Memories in Water", or a set of piano chords, as in "Alone". Other cues, such as "Fever and Nightmares", are more ambient in tone, similar to Aaltio's other feature score from 2008, Sauna.

The main theme itself functions as an emotional core to the film. It opens and closes in a D-minor key, with a jump to F-major briefly in the middle, before returning to the darker tonality of the minor key. The composer explained that this was done to insert a glimpse of happiness that never settles in, but is more sought after than found. The alternation between these keys creates the feel of the score that corresponds with the cold cinematography of the film. Cues like "The Past Revealed" and "The Farewell" build in a steep crescendo that maintains the tension in the score while also evoking a feeling of beauty that never is completely realized.

The pinnacle of the score is the finale cue, "Forgiveness", which sees a return of the main theme in its full orchestration, first heard in "Big Plans". This cue reminds me of the funeral scene from Michael Suby's The Butterfly Effect (the similarity in name being purely coincidental), in that it has a sorrowful, dark beauty that hints at happiness. "Forgiveness" begins with the theme on piano and segues into a slowly building string and piano statement. The theme is then played a second time that is the strongest orchestral presence in the score, but maintains the dark, minor key tonality, complete with suspensions between the string chords while also picking up the tempo. The album closes with a quiet piano solo in "Saying Goodbye". Home of Dark Butterflies is a score than many film music fans missed (admittedly, myself included) but is a stunning drama score from a new composer that is worth checking out. The film was not released in America, but the album is on iTunes, so I strongly recommend readers check out "Forgiveness" at the very least.