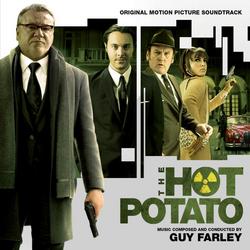 The Hot Potato, starring Ray Winstone, Colm Meaney and Jack Huston, takes place in 1969 and Guy Farley—himself a big fan of the film scoring aesthetics of that period—finds inspiration in the best of British soundtrack hip: John Barry, Laurie Johnson, Ron Grainer... The result is a very entertaining score with an infectious main theme and lots of underscoring for big band and orchestra.

Recorded at the legendary Abbey Road Studio 1 (where many of those original 1960s soundtracks were recorded in the first place), The Hot Potato is one of this year's most charming scores and one where soundtrack fans are invited to share the love of film music with the score's composer! If you like soundtracks such as The Persuaders, The Saint or James Bond you will have a smile on your lips from the first downbeat of The Hot Potato!

First edition of the CD is limited to 500 copies.