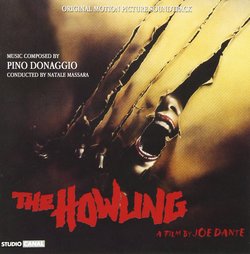 Credited with re-igniting and revitalizing the cinematic werewolf genre, Joe Dante\'s 1981 offering of The Howling was a fine way for him to follow his unexpected success with 1978\'s Piranha. Both films featured the Dante trademarks of blending morbid humor into genres, such as horror and science fiction, which often had been morbidly serious or dreadfully dull. He obviously has loved these types of films all his life and never fails to include this reverence for them in his own work. Italian composer Pino Donaggio, who had also developed an ongoing fruitful collaboration with director Brian DePalma, scored Dante\'s first two mainstream hits. Both directors seemed drawn to Donaggio\'s handling of suspense and horror in an insightful, classy manner, where strings dominated and were used to highlight every possible emotion wrought onscreen.

The story of The Howling follows traumatized TV journalist Karen White as she, while on retreat, investigates the odd behavior of the residents of "The Colony". The album and score proper for begins appropriately with wolf howls, followed by a brief, dramatic brass and timpani exclamation. "Dark Streets" are etched out in eerie strings of varying ranges, leading into an 8-note, legato main theme. "Sleaze / Karen\'s Nightmare" continues the uneasy string textures, while adding a hollow-sounding flute, but then moves into a secondary 2-note motif on low-range synths, doubled by voice, which wavers ominously below circling chimes. In "Eddie\'s Room" the score gets its first infusion of a church organ, while "Doctor\'s Orders" takes us by surprise in its melancholy acoustic and electric guitar duo and mellow pop backbeat.

The string-led suspense slowly increases in tension, first in a short outburst in "Escape From The Morgue", and then in "Wolf Bites Man", through cascading rising clusters combined with organ. The main theme occurs in "Something Nasty in the Woods", followed by a strange waltz idea on synths, bass guitar and drums for "Hunting For Shadows". The mood is also lightened a bit by flute, piano, harmonica and strings in "Terry and Karen / Delirium", but the final moments revisit the eerie, 2-note motif on synth and voice, rocking back and forth like an empty chair in a creepy haunted house.

"Animal Magnetism" is the first really lengthy track at almost 4 minutes, starting with chimes and worried strings on a variation of the main theme, accented later by darker cello counterpoint and dramatic rising chords from the organ. Churning low strings open "Wolf at the Door" before the violins and the organ dangerously dance around either other, sometimes in slicing gestures. Our first taste of brass and woodwinds in awhile is heard in "The Big Bad Wolf", where these sections take center stage, building to several crescendos. The next highlight is the 3 minute "Transformation", where the brass bellow strong, punctuated by timpani and growling synths, followed briefly by the 2-note motif and stabbing strings. "Welcome To The \'The Colony\'" paints a more subdued yet threatening landscape in low woodwinds, chimes and upper strings, then the organ forcefully leads the charge in "Fur From The Madding Crowd" (great track title!), alternating with both harried, racing and long-lined string textures.

This all leads up an attack of brass and timpani in both "Shapeshifters" and "To Make You Believe", before the tension is released by an idiosyncratic "End Title", where the mellow pop "Doctor\'s Orders" material is reprised by guitars, harmonica, sax and drums. Also included on this remastered, expanded edition are short mono bonus tracks, revisiting the main themes and also the theme for the news program for which Karen White reports, and also trippy, synth-only stingers. This is all topped off by informative liner notes from SoundtrackNet\'s own Dan Goldwasser and Messrob Torikian on the production and score, which are highlighted by new comments from composer Donaggio and director Dante. The Howling marks the first score I have heard by Donaggio, even after collecting hundreds of film scores for the past 20 years, but it does provide a great glimpse into his well-regarded talent for composing unique and memorable music.