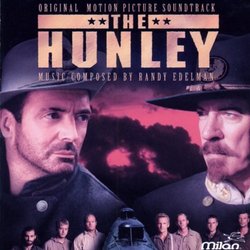 After TNT’s retread of recent history in The Pirates of Silicon Valley, I was kind of anxious to see how they would treat some older and better-documented history. The Hunley is the story of a Confederate torpedo boat and it’s last crew trying to breakthrough the Union's blockade at Charleston. It’s in the vein of Turner’s major labor of love, Gettysburg, and the network’s last Civil War historical epic, Andersonville, The Hunley delivers in expected style.

As in Gettysburg, Randy Edelman lends his talents in producing a fitting score for this telefilm. Some elements of his work on that previous film can be heard in the instrumentation and pieces of this score, not a repeat, but definitely influenced. Lacking something you can hum like many of Edelman’s themes, the opening title music is dark and ominous, as the title "Dark Seas" definitely fits, speeding up to express the excitement of the opening collage. The theme is presented as "Waves of Brotherhood", a seemingly nautical approach, taken by a lone trumpet to start, filled in later by strings and accentuated by snare drums to reinforce it. This theme is repeated in sections throughout the entire score, with varying tempos and instrumentation. An annoyance to me, at least to my ears, is Edelman’s insistence on synthesizers to fill out or act as substitutes for their acoustic counterparts. A dead giveaway on his retreading, albeit not in a bad light, is revisiting the themes from Come See The Paradise and guitar-like work from Last Of The Mohicans. Edelman is one of the current masters of typical action cues, which are interspersed throughout the CD, but not necessarily in sequence with the film.

One could only hope but make the connections, for good or bad this is at least one for the Edelman fans. Also, if you like your American history in compressed Readers’ Digest format, you might have a taste for this film as well. The background characters, for me being a "Yankee," were what we would think of as the motley crew that would inhabit a boat such as the Hunley. Armand Assante and Donald Sutherland play off each other well as leader and subordinate, with a relationship that’s actually a little hard to believe, but can be passed off in lieu of being entertainment and not a documentary.