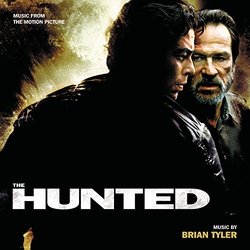 Brian Tyler managed to release three scores within three weeks in March 2003, each completely different: the sizzling, horror score to Darkness Falls; the ethnically influenced epic Children of Dune; and the most unique of the group, The Hunted. Starring Tommy Lee Jones and Benicio del Toro, The Hunted is a film about a trained killer (del Toro) and the man who trained him trying to hunt him down (Jones). The film delves into the psyche of the killer in this psychological thrilled and Brian Tyler wrote his score to reflect the dark and confusing recesses of his mind. Judging from the score, this guy must be insane.

The album opens with "Asymmetric Rhythms" and "Disordered Patterns" which are just that. Furious, racing strings and pounding percussion in an astounding series of odd rhythms. I can't manage to count them, but there is supposedly even a 19/8 meter in there somewhere. The album is short, only around a half hour, but that is more than enough because the music is so violent and fast-paced. However, Tyler's knack for making the most difficult of sounds enjoyable saves what could have been an obnoxious score. He mixes low brass and light electronics in with the furious string work and varied percussion lines to build cues that are both enjoyable and absolutely intriguing. The best track is easily "Pulse", which has trilling strings and rock-like drums backed by some great brass chords. The meter is 4/4 as best I can tell, but the emphasis on the notes are such that it sounds quite off-rhythm. Not the whole album is so violent; "Winter Shift" is a beautiful moment of strings, trumpet, and horn.

The Hunted was the score that landed Tyler the job of writing a replacement score for Timeline, and parts of the latter score are similar to The Hunted, namely the cues from that film in the modern day. This score is not as thematic as some of Tyler's other work, but it is worthy of academic study with all the experimentations in rhythms. It is a hard score to listen to, but easy to enjoy.