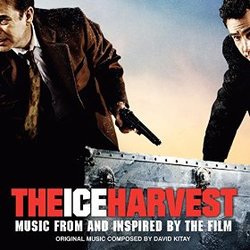 Twenty-six straight minutes of agonizing notes on celli and basses, groans really, can really suck the Christmas spirit right out of you.  That\'s what we are being served with David Kitay\'s score to The Ice Harvest: painfully low and long moans on celli and basses, with an occasional string being plucked to wake us up from our wintry torpor.

Luckily, someone had the brilliant idea to add a few songs to the album and some of those selections come off as stronger offerings than Kitay\'s depressing and lumbering score. The soundtrack begins with a country rock song, "Nothing But the Wheel", which sets up the locale, but it\'s really Eels\' "Trouble With Dreams" that warrants accolades. With what is perhaps the catchiest song on the album (it was actually used prominently in the trailer for The Ice Harvest), Eels comes up with a solid blend of acoustic and synthetic elements featuring a glockenspiel ostinato and the lead singer\'s rough voice to give us a great modern Christmas-y song. The following three songs thread the fine, WB-friendly line between genuinely-original alternative Christmas music and commercial fare. Then again, alternative is the new pop. Funeral for a Friend sings "Miracle of Christmas" in a radio-friendly way; Louis XIV presents a catchy alternative Christmas song straight from the UK with "This Christmas"; and Hidden in Plain View comes up with a horrendous soft-core punk "Christmas Song" with annoying processed vocals and dance-like beats.

We are then taken through the motions of holiday classics, with "The Chipmunk Song", "The Little Drummer Boy", and "Hark! The Herald Angels Sing". The mall muzak of the Cranberry Singers makes way for jazzy renditions of both "Silent Night" and "O\' Tannenbaum".

Then, the groaning begins. We are forced to sit through minutes upon minutes of slow rhythmic figures on low strings with sustained chords on violins, with occasional coloring by synth effects and plucked strings. "Man Down" and "Money Isn\'t Everything" are based around a main theme of sorts, jazzy yet indecisive, and "The Lake" showcases the main motifs which are too inert to carry the whole score on their frail shoulders. Every score track is worthy of the skip button, which is as bad as it gets. The whole thing feels like "Rura Penthe" from Star Trek VI: The Undiscovered Country, but without the great material that comes before and after it. Kitay\'s score might function adequately within the movie but, on CD, it\'s a dead body with low rumbles, tired progressions, and no energy whatsoever.

The people behind the album could have released "Trouble With Dreams", "Miracle of Christmas" and "This Christmas" as a single and we all would have been a lot happier, I\'m afraid. They say (erroneously, I gather) that the rate of suicides goes up during the holidays: this might be the long-lost reason. For better Kitay string work, see his positively-addictive Baroque Ghost World.