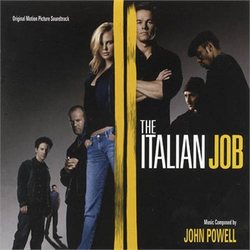 The Italian Job is yet another trendy heist film spawned off the success of Ocean's Eleven.  For the film, composer John Powell has fashioned a score that has the fun of Ocean's Eleven, but lacks the suave style that makes a heist score so enjoyable.

"Opening Titles" establishes The Italian Job main theme.  It is quite light and sounds much like other John Powell non-action pieces.  He blends an interesting mix of acoustics and electronics layered on top of an orchestra.  The first action piece on the album is "Boat Chase", and this track is a lot of fun.  There is nothing new here in terms of action music, but it's just a great mix of techno/orchestra fusion that'll get any action junkie's adrenalin pumping!

A personal favorite track is "The New Plan".  This piece is just plain cool.  The music starts off slow but builds with electronic loops and some catchy string & cello hits.  "The Tunnel Run" and "Chopper Chase/Face Off" are also good cues.  Both tracks are charged with non-stop action and are extremely fun to drive to.  The disc closes with "Golden" - a cue that sums up the score by reprising some themes and action motifs that we had heard established earlier in the album.

In the end, The Italian Job is a fun listen.  The tracks mentioned above are pretty much the highlights that the album has to offer.  The rest of the tracks are generic and atmospheric, but interesting never-the-less.  Hints of Powell's score to The Bourne Identity are there, but Powell doesn't recycle himself.  This score just has that "John Powell sound" to it.  And that works for me!