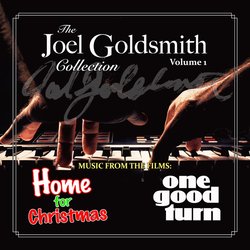 Home for Christmas starred a young Jennifer Love-Hewitt as a millionaire heiress who runs away from her step-parents to find her real mother, prompting an all-out pursuit to find her. The latter is a revenge thriller with an unusual twist, as a reunion between a guy and the man who saved his life years earlier becomes a deadly quest for unfulfilled vengeance. Home for Christmas's music is mostly written for a rhythm section/rock combo with a small orchestral ensemble, giving the film a lighthearted, toe-tapping, and forward-moving vibe; while Joel's music for One Good Turn, is quite at home in dark thriller territory, offset by a sublime love theme. The small orchestral score is suspenseful and provocative.