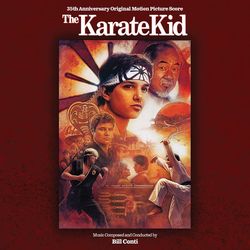 La-La Land Records and Sony Pictures proudly present the re-mastered reissue of acclaimed composer Bill Conti's original motion picture score to the beloved 1984 classic The Karate Kid, starring Ralph Macchio, Noriyuki "Pat" Morita and Elizabeth Shue, and directed by John G. Avildsen. Previously out of print, the legendary The Karate Kid score returns, sounding better than ever - with all-new packaging featuring a cover illustration by artist Paul Shipper commissioned for the film's 35th anniversary. The new, exclusive liner notes by Al Kaplan, include new interview comments from composer Conti, along with an introductory message from star Macchio. As with the film itself, Conti's wonderful and perfectly-pitched score stands the test of time. It's the film's musical heart – beating with drama, excitement and inspiration to spare! Produced by Neil S. Bulk, mixed by Michael McDonald and mastered by Doug Schwartz, this special limited edition CD release of 3000 units was sourced from studio vault elements and is expanded with additional music tracks, including the composer's score for the film's final fight, which was unused in the film. The high-kicking art design is by Dan Goldwasser.