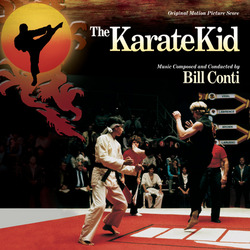 For those who may have missed our The Karate Kid boxed set (The Karate Kid I - II - III - IV), featuring the scores for all four Karate Kid films, now comes the opportunity of buying Bill Conti's original score for the first film, all by itself.

Bill Conti's score for The Karate Kid (1984) is one of the quintessential scores from the 80s that everyone remembers. It is also a score that left film music fans of the time absolutely bewildered that such a famous score for such a successful film could go unreleased. Conti's score is, at turns, charming, beautiful, pensive and powerful. It hits all the right notes and features none other than Zamfir himself on pan flute, representing the mystic side of Pat Morita’s Mr. Miyagi.

The master for this CD is identical to disc one from our previous boxed set.