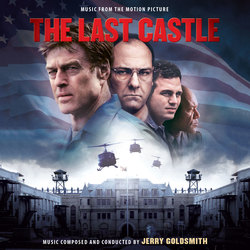 Intrada's latest release features an expanded edition of Jerry Goldsmith's score from the 2001 Paramount Pictures film The Last Castle, courtesy of both Paramount and Universal Music Group. Goldsmith was no novice at scoring military-themed features, having scored the early '60s A Gathering of Eagles early in his career through to Executive Decision in the mid-'90s. Goldsmith's fondness for solo trumpet was a hallmark of this military sound, a masculine sound that could represent the military aspect of a character (most notably in scores like Lonely Are the Brave and First Blood). It's a sound he employed generously in The Last Castle, capturing prisoner General Irwin's past glories as well as his competence at inspiring his fellow inmates. The trumpet is performed here by Malcolm McNab, who also contributes a few thoughts to the album's liner notes. It is a brass dominated score, but that's not to say woodwinds are not given their due for moments requiring more sympathy. It was Goldsmith's last full-blown military score.

To present the complete score for The Last Castle, Paramount provided Intrada with access to the complete scoring session elements. Originally recorded on 48-track digital tape, veteran scoring mixer Bruce Botnik had created both 5.1 film mixes and two-channel stereo mixes. Both were used in assembling the 2-CD set, which features the complete film score on disc one, followed by several unused alternates. Disc two features the Goldsmith-supervised classical source music, including the Salieri "Concerto for Oboe, Violin, Cello and Orchestra in D Major," courtesy of Naxos Music. This is followed by a remastered presentation of the original Decca album program.

The film tells the tale of conflict between the warden of a military prison and a revered general, imprisoned there, who eventually earns the respect of the prisoners and leads a revolt against the cruel, petty prison commander. Robert Redford plays the general and James Gandolfini the jail warden.