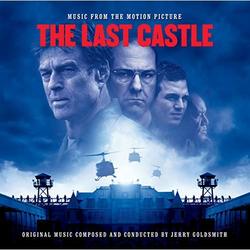 The Last Castle focuses on 3-star General Irwin (Robert Redford) and the prison uprising he leads against the warden, Colonel Winter (James Gandolfini).  The film explores the idea of honor and what it means to be a soldier, with only limited success.  We are set up to see Irwin as the good guy and Winter as the bad guy, but unfortunately (at least for me) that never happens.  So when what should have been an inspiring prison revolt occurs, I only feel disturbed.  The problem with any prison uprising movie is that in the end, regardless of the outcome, those that took place in the revolt are still criminals.  Even worse, in the case of The Last Castle, is that Irwin has admitted to his crime.  I suppose in the end it's all about honor and justice, but Winter never comes across as evil enough to hate.  Sure he's got some major problems, but in the end, it doesn't seem to add up to much.  (Yeah, he's strict.  But remember - this is prison!)

The score by Jerry Goldsmith is a fine one, with a notable main theme.  "The Castle" allows us to hear this main theme in its entirety.  A solo trumpet (adamantly performed by Malcolm McNab) is soon joined in by military percussion and horns. The theme makes a bold statement, and is both somber and respectful.  Unfortunately, that melodic theme is also the downfall of the score.  How many times can we hear this same 24-note theme over and over?  Apparently not enough!  Depending on the scene in the film, there are slight variations in orchestration and approach, but the theme is present throughout.  While watching the film I couldn't help but think that I was being hit over the head with the theme to the point of forcing melodrama.  Which is a shame, since it's a very good theme.

Action is definitely present in this film, and Goldsmith does some great work in "Full Alert" and "Taking Command".  The military percussion and occasional odd percussive hits add a nice sense of foreboding and danger.  The final standoff in the film is underscored by "The Flag", a tense cue that breaks into the somber main theme when the film comes to a resolution.  The score runs a little over 32 minutes, and believe me - that's just the right amount.  It's a quick and satisfying listen, and you'll definitely be humming this theme after listening to the album or seeing the film.

Also included on the album is an arrangement of the theme that Goldsmith worked for a Hollywood Bowl concert, entitled "September 11, 2001 - Theme From The Last Castle".  The somberness of the title is fitting as a tribute to those lost in the horrible attacks that day, but I'm still a bit unsure about the reason behind it. Sure it's a nice theme that fits, but does it really honor their memories by taking a theme that was already written and "moulding it" to fit a tribute?  I personally would have preferred an original composition, but such is life.  Two source cues present in the film add a touch of color, but don't do too much to enhance the album.

Is The Last Castle for you?  Well, if we're talking about the film, I can't help but think there are going to be plenty of people split on this one.  I thought it was well directed and acted, but the glaring script and plot problems make this one a tough cookie to swallow.  But if we're talking about the album, then that would be a definite "yes".  With a strong theme and some exciting action cues, this album most certainly makes up for the humdrum score that Goldsmith delivered in Along Came A Spider.