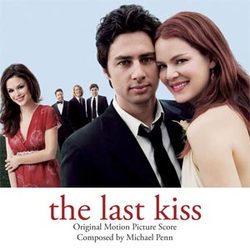 Perhaps what is most baffling about Suite from The Last Kiss is the way it was released. On a movie such as this one, where songs rule and score tracks are minimal, a short score suite is usually relegated to the end of the songtrack. Michael Penn\'s music to The Last Kiss was not included on the regular soundtrack but is being released as a separate, fifteen-minute one-track suite digital download. It is an interesting marketing move which shows a willingness to adapt to today\'s fluid and interactive electronic market and it remains to be seen whether this move is the shape of things to come or an unsuccessful experiment. Perhaps what might prove to be decisive here is the content of this mini-album: Penn\'s reflective, minimal score is mildly interesting on its own, with an appealing intro and a convoy of smaller cues that never quite live up to it.

"The Last Kiss" is the first cue and it plucks a gentle rhythm from the reggae school mixed in such a way as to make it sound distant and filtered. On top of this offbeat rhythm, a single contrabass and two clarinets provide a dreamy, slightly jazzy soundscape softly colored by synth effects. It is an interesting mixture of styles which unfortunately is restricted to this cue only. What follows lacks this personality: we are treated to sentimental piano nocturnes, fairly standard and sparse. Penn pulls us out of this nighttime dubiety for an acoustic guitar and string quartet breath of fresh air which somewhat recalls The Tea Party\'s "Gone" and is over way too fast; at the 11:30 mark, it\'s a classic rock anthem with a catchy motif which plucks us out of the piano wanderings but, like the plucked-and-bowed string piece before, it is over before it has had time to fully strut its chrome steel feathers.

Michael Penn is actors Sean and Chris\' brother and a successful singer/songwriter and occasional film score composer. These were all facts I was unaware of going into Suite from The Last Kiss. Perhaps that does not make me the best person to be reviewing this short album: a fan of Penn\'s work would undoubtedly uncover idioms and -isms and compare parts of The Last Kiss to this and that song from Penn\'s body of work. I can only appraise the music on its own, regardless of its origins. While a few cues are fairly interesting (the reggae and jazz mix, the use of the acoustic guitar, the classic rock instrumental) and false harbingers of a better work, the piano cues are fairly standard. They might serve the film and act as a minimal glue in between the catchier songs but, as a fifteen-minute suite, their showcase is somewhat lifeless. Fans of the film and of Michael Penn\'s career will surely find interest in this digital download; for everyone else, this is mostly stark, minor key music for late night doubts and sleepless weeks.