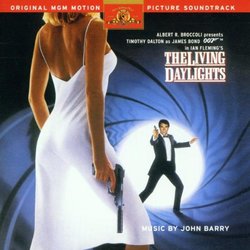 by Dan Goldwasser June 23, 2001
4 / 5 Stars
In 1987, John Barry graced the film music world with what would unfortunately be his last score for a James Bond film: THE LIVING DAYLIGHTS. Released by Warner Brothers Records, this CD was released at a time where many manufacturers were just making the transition from LP to CDs as their standard release format. As such, only a limited number of THE LIVING DAYLIGHTS cds were manufactured, and the album quickly rose in value from collectors who wanted to own the original CD release.

Now, more than 10 years later, Rykodisc has re-released this fabled CD, with an additional bonus: almost 30 minutes of unreleased music accompany the contents of the original CD. Bond fans should be very very pleased.

The CD opens as one would expect - the main title song "The Living Daylights" performed by a-ha. It certainly sets the stage for what will no doubt be an exciting Bond score. The next 11 tracks are typical Barry with a twist: a synthesized percussion track adds a modern feel to the score.

THE LIVING DAYLIGHTS signified Timothy Dalton's first of what would be only two Bond films. With a new look and feel, it seems only appropriate that there be a new sound - and Barry provides it, while still maintaining the classic Bond style. We have the large horns, the soft flute solos, the string work - it's all there. Barry never seems to overscore - if anything, it is his simplicity which makes the score work as well as it did.

The new material included on the disc includes the opening sequence of the film, including the classic "gunbarrel" opening. The jailbreak sequence, and the bombing of the bridge are just a few treats we are handed in the Bonus Materials section of the disc.

As usual, Rykodisc's liner notes provide us with plenty of insight into the score, and the film itself. They also include a mini-poster from the film, and multimedia content on the CD for your personal computer. (Unfortunately, instead of the customary quicktime trailer, we are just provided with a scene from the film.)

THE LIVING DAYLIGHTS is now available in stores.