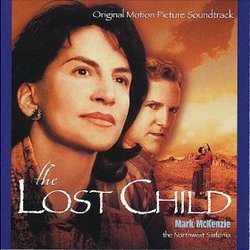 by David A. Koran June 23, 2001
3.5 / 5 Stars
It’s been a while since I’ve had the chance to listen to some of Mark McKenzie’s work, albeit on CD or even in a move. Granted, as of recent, Mark’s work has been hard to miss, with a number of films and T.V. projects scored or orchestrated over the past year nearing a half dozen or so, with about half of those making it to CD. The most recent, the Hallmark Entertainment film The Lost Child, is one of Mark’s most endearing to date. Having had a previous take on scoring "the West" in Frank And Jessie, Mark McKenzie turns on the sentiment and delivers a score on par with one of Basil Poledouris’ greats, Lonesome Dove. This score, as presented on Intrada’s release, is definitely mature and well written, a prized jewel in a year of slapdash and emotionless scores.

The Lost Child tells the story of a Navajo girl, Rebecca, who was separated at birth and brought up in a Jewish family outside the reservation. After the death of her adoptive mother, she goes on a search for her roots, which leads her back to her true family. This is only to say that after this searching, Rebecca finds that blending her upbringing with her new found origins into her life is hard and tenuous at best. Mark’s score for the film underscores the tender moments with amazing feeling and presence. The selection of The Northwest Sinfonia to perform this is also a mark of musical quality. With such great performances on The Arrival, Incognito and Snow White: Tale of Terror to their name, one would guess that the musicianship here is pure and good. Overall, for strictly soothing music, this score hits the nail on the head. Even during the "tense" moments, the score has a level of peacefulness that many composers forget that they can use to illustrate inner tension and conflict.

With his excellent use of woodwinds and guitar, Mark also is able to blend western "orchestral" music with the "ethnic" melodies of native America perfectly. The suite of music presented at the beginning of the album is an excellent opening for the CD, summing up the major themes and passages that are in the full score. Alone, I would place this on a mix or compilation collection of themes from some of the better music of the year. This cue would accompany, hopefully, some of Chris Young’s work on Wonder Boys and The Big Kahuna and, oddly enough, Carter Burwell’s work on What Planet Are You From. One would like to see that if enough film and T.V. executives stay home on Sundays to catch some of these telefilms, that eventually more composers like Mr. McKenzie will become mainstream nods for scoring bigger projects. Personally, I’d like to hear the future’s replacements for John Williams and Jerry Goldsmith, and I think we have a contender here on our hands.