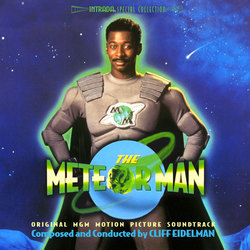 "I wanted a bigger-than-life orchestral sound that would tell you who was driving the energy of the score and to hit all of the different levels of the story." - actor/director Robert Townsend

For the 1993 MGM film The Meteor Man, composer Cliff Eidleman drew upon his inspiration from the pacing and large orchestral forces of such scores as Star Wars and Back to the Future, concentrating mostly on capturing the Meteor Man's mythic dimension.

"For me, 'superhero' music has extra muscle, a quality that transcends and takes flight," Eidelman said. "That made it important to reference the stylistic feeling of the big superhero scores of the past, which had the straight-ahead sound of guys fighting for truth and justice. But [The] Meteor Man also had a completely new take on the subject matter. So I went for an approach that would be catchy and soulful." Eidelman wrote a considerable amount of original orchestral underscore for the film, recording over an hour of exciting and energetic music on a scale of his other massive genre score, Star Trek VI: The Undiscovered Country.

The premiere release of Cliff Eidelman's score is mastered directly from the digital two-track session masters, with the first 58 minutes constituting of the score in picture sequence, minus some very short bridge cues and other brief pieces. For completists, these additional 12 minutes of music appear as extras following the main program.