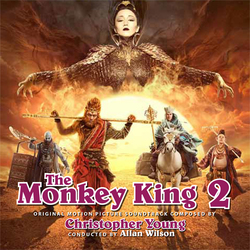 For composer Christopher Young, the challenge with scoring The Monkey King 2 was how to top what he had created for the original film. The Monkey King had already prompted Young to marshal vast orchestral and choral forces to accompany reels of action-packed spectacle. Young's hook for the sequel score came from the locale. Whereas the first film took place in in a fantasy world of Heaven, the sequel takes place on Earth, with a need to musically address the emotional voyage of the characters. New characters afforded Young the opportunity to compose new themes, most notably the haunting theme for Lady White Bone, with its languid, sensuous malevolence.

As with his first Monkey King album, Young's score has been arranged into movements loosely titled after the film's characters. In addition to the new themes for Sanzang and Lady White Bone, there is quirky material for the bickering companions Bajie and Wujing. There are also passages of riotous action, including music for the whirlwind final battle against a skeletal army. The lengthy track titled after the bat demon is particularly intense, with aggressive use of electric guitar and pounding drums. The intention of the composer is for each track to flow into the next, culminating in the triumphant return of Sun Wukong's theme from the first score in the final movement.