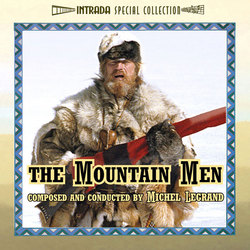 Columbia Pictures' The Mountain Men (1980) is partly a throwback to the western conventions of the '30s to the '50s and partly a product of the heightened tolerance for violence and sexuality that came to the fore in the '70s and '80s. The film sports a lush, sweeping and propulsive symphonic score by Michel Legrand which ranks as one of the orchestral high points of the composer's career.

Noted for his jazz and song-driven scores, Legrand made only infrequent forays into symphonic work and action films. The Mountain Men provided an enormous tapestry for Legrand with its widescreen scenery and an almost constant stream of extended action sequences. The Mountain Men features more action writing than almost any other score by Michel Legrand—virtually every cue features action material, much of it dense and rhythmically driven, full of repeating figures alternately played by upper range brass and strings, sometimes doubled by glockenspiel, xylophone and flute when extremely bright accents are required.

Legrand's approach to action is idiosyncratic—he scores most sequences almost in the form of a ballet, maintaining set rhythms rather than specifically "hitting" actions or adjusting his rhythmic approaches to reflect camera movement or the pace of editing. This makes his music particularly satisfying to listen to in album form as his action cues maintain a strong musical structure throughout their often lengthy running times. Legrand's main theme for the protagonist Tyler and his powerful Heavy Eagle theme alternate through many of these cues, surging underneath and soaring over kinetic rhythmic material.

For this release, Sony Pictures Entertainment provided the original multi-channel scoring session masters superbly transferred into 96 bit/24 kHz high resolution data files. These were newly re-mixed into two-channel stereo, then edited and mastered into album format at Intrada. The result is 50 minutes of crisp, dynamic audio for one of Michel Legrand's largest, most dramatic scores.