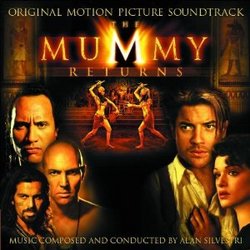 Performed by
The Sinfonia Of London Orchestra and Chorus

When it came out in the summer of 1999, The Mummy was a smash hit, with its 1930's serial-styling and fun popcorn entertainment approach to making a summer movie.  (Light on the drama, heavy on the fun.)  Immediately afterwards, director Stephen Sommers announced he would create a sequel to the film, The Mummy Returns.  Everyone came back for this one- the producers, director, actors, even the ILM visual effects team.  But composer Jerry Goldsmith didn't come back.  After making some very public negative comments about The Mummy, it's not surprising that he wouldn't want to return for the sequel.  Instead, tapped to score The Mummy Returns was Alan Silvestri, whose action scores have included Back to the Future, Predator, Eraser and The Long Kiss Goodnight.  I mention those in particular because I can sense a stylistic influence from all of those films that make their way into Silvestri's score to The Mummy Returns.

Beginning with "The Legend of the Scorpion King", in which a huge battle takes place, Silvestri is immediately in swashbuckling mode.  With large orchestral action and choir, the tension is in full swing.  It's five minutes of almost non-stop action, and it's just a taste of what is to come.  No Mummy movie would be complete without moments of nervous horror, and "Scorpion Shoes" helps fill in the gap, but only for a little while.  Soon Rick and Evy (Brendan Frasier and Rachel Weiss) discover the Scorpion King's Bracelet, and the action picks up again.  In "Imhotep Unearthed", large-scale drama is mixed with ethnic motifs and low choir.  There is even a hint at Goldsmith's main Imhotep theme, but it's not a priority for Silvestri - he focuses primarily on his own new material.

"Evy Kidnapped" is the first time we really hear the main heroic theme, a swashbuckling Korngold-esque motif that actually reminds me a bit of Hummie Mann's main theme from Robin Hood: Men In Tights.  But it works exceptionally well for the film, and in the end that's what truly matters.  "My First Bus Ride" is another full-on action cue that integrates much of the thematic material heard so far, including brass screaming the main heroic theme (resulting in what sounds like a flubbed note at 1:10).  "Medjai Commanders" contains another sweeping epic theme that sounds a bit like a combination of Lawrence of Arabia and The Ten Commandments - that is to say, it evokes the Egyptian desert.

In a tense flashback sequence, "Evy Remembers", Evy remembers her past life as the Pharaoah's daughter.  I particularly enjoyed how Sommers recreated the prelude from the first film, but from another point of view.  Silvestri's score is tender and sweeping, but soon becomes tense and energetic.  It's one of the highlight cues of the album, but not as much as the next cue, "Sandcastles".  I particularly enjoyed this montage sequence in the film, because it allowed Silvestri the chance to let the score take center stage.  The result is a fun cue with lots of rhythm and a sweeping theme, evoking travels.  Once the choir comes in, I'm sold.  "Pygmy Attack" is a tense sequence that (in the film) reminded me stylistically of the raptor attack in The Lost World.  But Silvestri's music is different than Williams', and the music for this cue is incredibly tense.  "Come Back Evy" is both tender and tense, but "The Mummy Returns" is a great final cue, using most of the themes and action cues in the score.  It's a great suite that runs nearly 8-minutes long.

The one song on the album (and in the film) is Live's performance of "Forever May Not Be Long Enough".  Lyrically, the song fits into the whole idea of Imhotep and Anak Sun Amun's eternal love for each other, but the song just feels completely out of place.  This film takes place in the late 1930's and to have this modern song slapped on at the end of the film completely ruins the whole atmosphere that the film spent 2-hours creating.  It's a disappointing way to end the film, and the album.

Silvestri composed over 100-minutes of score for this film, and only about 70-minutes show up on this album.  I don't really miss the other 30-minutes; it's a satisfying album as it stands.  It has action, drama, tension, and a tad of romance.  You can't ask for much more in a summer movie score, and Silvestri has certainly delivered.